The value of the resistor that you use to protect an LED determines its brightness. To change the brightness of the LED, you use a potentiometer instead of a plain resistor. If you want to control LED brightness from software though, you do Pulse Width Modulation (PWM) on an IO pin to which the LED is attached.

Here in this topic we will be doing just that,

Electronic engineers can come up with much better explanations of PWM than I ever could. Please watch the following video if are not yet familiar with PWM (you may skip the second half which is about building a PWM circuit).

Why An External PWM Controller?¶

One can use a computer - an Arduino, or any other microcontroller, or a PC - to drive the PWM signal by a program that runs on the CPU. But the more PWM lines you have to drive, the more complex the program will become:

Microcontrollers usually run some kind of realtime OS, or no OS at all. Whether there are timer delays depends on the quality of the OS’s timer management, naturally, and all of the caveats above apply.

Linux is much more complex than any bare-metal OS that is usually used for such applications. It has a network stack that operates in the background, and a filesystem and block IO layer, and maybe a graphics stack, other software such as remote login programs, a webserver, and much more. There is much more contention for CPU resources. Linux’s contention management strategies are quite elaborate, and the programmer is not always in control of every single piece of it.

Driving a PWM signal at a millisecond frequency means that the PWM software would have to compete with a possibly unknown number of other processes in the system - leading to glitches and hard-to-detect errors. While Linux, as deployed on the Raspberry, has real-time capabilities that try to give wakeup guarantees, this is a best-effort approach. Turning Linux into a realtime OS that gives hard guarantees is no fun is rather hard. There is a version of a realtime preemption kernel for the Pi, I recommend to go out of its way if this is possible.

Attaching a PCA9685 PWM controller is really simple as the remainder of this topic will show, and to use it from Linux is even simpler.

That said, here’s the wiring. 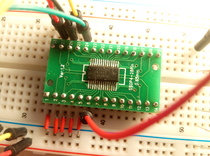 The PCA9685 is connected over I2C, which is a two-wire bus where each device has a 7-bit address. Note we connect the address lines A0-A5 to ground. According to the data sheet, the highest address bit is 1, which gives an address value of 0b1000000, or 0x40.

If everything is ok, we should be able to detect the chip at this address. Enable I2C on the Raspberry, by editing /boot/config.txt, so that it contains the following line (that line is already there, it’s only commented out),

Reboot. Now we see a filesystem representation of the I2C bus in /dev. This is bus number 1 (as opposed to bus number 0 which is used internally for the camera interface, and which is not exported to userspace).

We are now in a position to probe that bus for devices, using the i2c-detect program.

The addresses are in hexadecimal notation. We see address 0x40 which is what we expect from the wiring. The PCA has a second address, 0x70. That is something like the broadcast address to use when there are multiple PCA’s on the same bus, and which you want to give commands simultaneously. We don’t use this feature so we can ignore that second address.

Ok, so the device is there. We do not want to talk to it “by hand”, using /dev/i2c-1. We could, see here for how, but we won’t. The Linux kernel has dedicated PWM subsystem that is used to control PWM devices, regardless of their peculiarities such as whether they are connected on a I2C bus, or SPI, or whatnot. There is a driver for the PCA9685; enable that in /boot/config.txt.

To learn how this is done, you browse through /boot/overlays/README which is a definitive list of devicetree overlays available. Find the PCA9685’s overlay which is responsible for hardware initialization, and finally announces to the kernel that there is a device that requires driver loading. For reference, here’s the corresponding snippet.

Put that in /boot/config.txt,

Concluding the setup, we quickly check the list of modules loaded, and see how the ones are in place that are relevant for our purposes.

Strictly speaking, there is no need for i2c_dev. It makes /dev/i2c-1 available to userspace; we intend to use the PWM driver pwm_pca9685 and the PWM userspace interface that it provides. That driver does I2C communication with our PCA9685 internally in kernel space.

Finally, setup done; read on for how we do PWM on the commandline.

Now that we have everything in place, lets quickly see how to use the sysfs PWM interface 1. The pwm_pca9685 driver exports the device in a directory under the sysfs tree,

/sys/class/pwm/pwmchip0 is actually a symbolic link to a device which obviously is located in an area in the sysfs tree that is responsible for I2C. We do not care. Change the current working directory into there.

Unfortunately, the default permissions of the sysfs PWM interface are root/root, so we have to be logged in as root. sudo -i will do the job, for example.

(The # prompt shows us that we are logged in as root now. We ignore security warnings.)

Now, shift our butt into the chip, and see what’s there,

PCA9685 metadata all over. Note that don’t see any mention of PWM channels. We connected the LED to the PCA’s pin 6, which is PWM channel 0. Export that to userspace, by writing 0 into the export file 2.

Aha, that created a chip subdirectory, pwm0. Shift butt into, and see what’s there.

Sounds much like PWM. The files period and duty_cycle, like the export file above, are not persistent on any storage media. Rather, they actually provided by the kernel who sits under the surface and observes any read/write operations.

Lets configure PWM, by writing time periods (in nanoseconds) into those files. First the PWM period,

This does nothing because the duty cycle is still 0,

All that in a video, for ultimate visual experience. Manual focus on the camera is not easy to have though, I apologize.

Linux has a nice way of integrating hardware interfaces like I2C, PWM, GPIO, and much more. The interfaces that the kenel devlopers created go together very well with the good old UNIX paradigm: everything is a file.

The PWM interface is just one of those interfaces; as you explore what else can be done with Linux, you will encounter many interfaces that are designed in this way. For me as a trainer, it is always a great pleasure to show how easy it is to write a working prototype in no time, requiring as little code and hardware experience as possible.

As always, there is more. Read it up in the kernel documentation

Channels are not exported by default. This is to avoid conflicts with kernel driver which might have grabbed the channel for their own purposes.

The brightness is not quite linear with the duty cycle, this is why the value might look a bit odd.