The focus of this post is to control a brushless motor from an automation point of view. Imagine an autonomous vehicle that grabs boxes from a storage rack. It has several motors, and a small computer (a Raspberry Pi for example) that controls the motors based on what it is told over, say, an internet connection. The vehicle might also do image recognition, which is why choosing something more powerful than an Arduino might be a good idea.

There is quite a bit of information out there on the Internet about how to talk to an Electronic Speed Controller (ESC - the thing that actually controls the motor). Those pages explain the topic in the context of microcontroller programming, or even in the context of a ready-made flight/drone firmware that is put onto Arduinos.

This is much the same as in the PWM topic. There, we used channel 0 (pin 6) to control the brighness of an LED. Here, we use the same pin as input to the ESC’s signal wire.

See the PWM topic for an explanation of what PWM is, and how to use a Raspberry Pi and the PCA9685 to generate PWM signals. This is information that is heavily used in the remainder of this post.

Unfortunately, the default permissions of the sysfs PWM interface are root/root, so we have to be logged in as root. sudo -i will do the job, for example.

That said, we use channel 0 (available through pin 6) to communicate with the ESC, so lets export that and move ourselves there …

Watch the video below to learn how brushless motors work, and what the job of an ESC is. That video also explains briefly what Pulse Width Modulation (PWM) is; see here for more.

This topic is about speed controllers that use PWM as “command protocol”. While using PWM as a protocol sounds like a poor architectural decision - to say the least - such controllers are the most common, and I believe they are also cheapest, which is why one such - Quicrun 16BL30 - was chosen for this little prototype project.

Check out the datasheet/manual of the 16BL30, I’ll refer to it below.

Point of the project is to drive an autonomous vehicle; this is different from flying a drone (only forward rotation), or driving an RC car (where one wants forward, backward, and brake). What we want is forward and backward rotation: software controls vehicle movement entirely, no need to brake. Select that mode, according to the ESC “datasheet”.

All that in a video …

The “Command Protocol”, and Calibration¶

Turn on the ESC. It will go into error mode immediately because nothing is set up.

We do not have an RC transmitter and a throttle, nor do we have an RC receiver that generates a suitable PWM signal on the ESC signal input. We do have a Raspberry though that is supposed to play that role. We just haven’t configured the PWM signal, which is why the ESC refuses to do anything.

The following picture (kindly stolen from “How To Mechatronics”) shows what is expected from us. 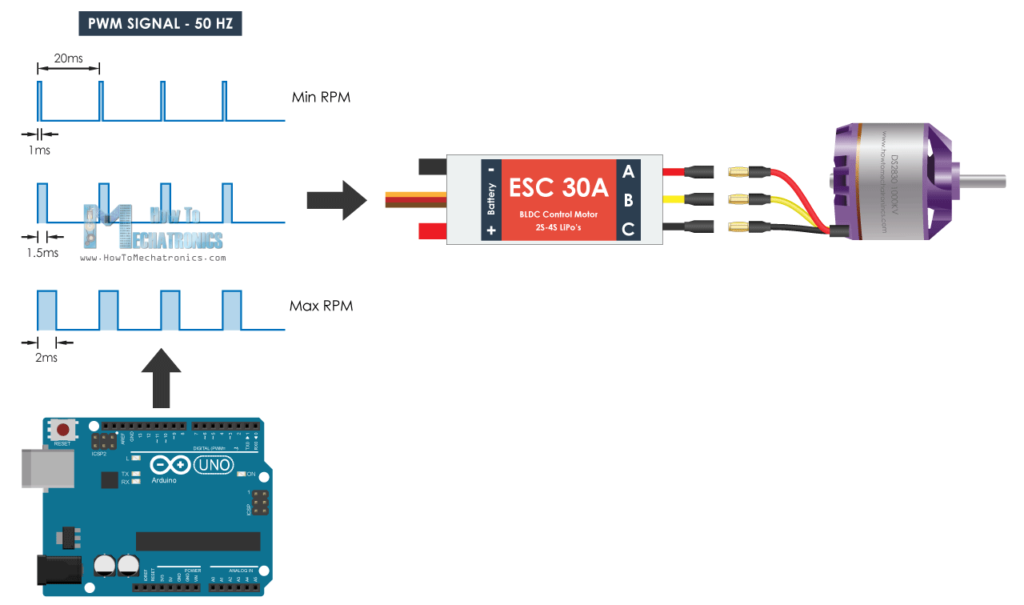 So the ESC’s “command protocol” requires us to output a PWM signal with a 50Hz (20ms) period. Within that period, the PWM signal’s duty cycle is used to communicate the following commands to the ESC.

Before we continue, we configure the base PWM period to 20ms. The Linux PWM subsystem’s PWM timings are configured in nanoseconds, so this is 20,000,000 nanoseconds.

PWM frequencies are a rather poor way of implementing a protocol. They depend on oscillator frequencies, supply voltages, and whatnot. This means that you have to calibrate the ESC with your specific situation before you can expect to talk to it and actually run a motor. For the 10BL60, the calibration procedure is defined in the datasheet, “Set up Throttle Range”.

All that in a video …

Controller calibrated, all set, we are now ready to drive the motor.

Some commandline shell programming, as a quick prototype of a hypothetical program …

While there was some fun to have from this prototype project, I can imagine that autonomous vehicles will not be equipped with such kinds of motors/controllers. I tried this out for a friend who is into logistics and automation, and whose hobby is RC airplanes (which might explain much). PWM is a rather poor way of communication; the calibration procedure is nothing that is wanted in production. There are ESCs that use CAN, for example, which is a real and much higher level protocol that has no quirks.

The fun part for me is to show how hardware is integrated into Linux, and how this fits into the good old Unix paradigms. For PWM, for example, sysfs is used to expose PWM chips and their channels to the user - who is then able to control it using simple shell commands. It does not require too much fantasy to come up with a programmatic to do what we did on the commandline - one can use any language that is capable of doing file I/O. Much unlike bare metal microcontroller programming - this usually requires a good understanding of C/C++ and all the pitfalls such languages and environments involve.